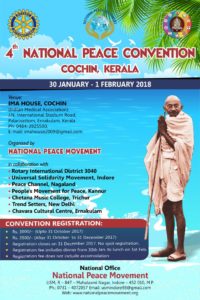 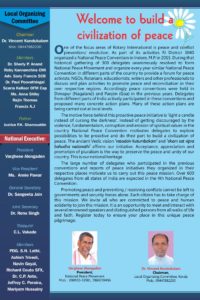 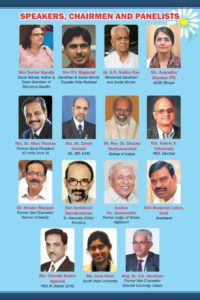 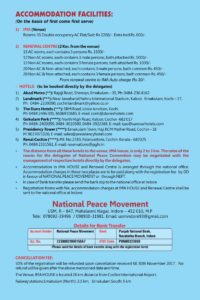 The National Peace Convention starts every year on 30th January, the death anniversary of Mahatma Gandhi, by paying tributes to Gandhiji and it is concluded on February 1. Throughout the convention the contribution of Gandhiji for peace is highlighted. One of the objectives of the Peace Convention is to disseminate the relevance of Gandhiji and his methods based on non-violence and forgiveness for conflict resolution and prevention.

When peace and harmony are disturbed and threatened in many parts of the world, particularly in our country, India, we, 372 delegates from 15 states of India, who are keen to nurture and promote peace and reconciliation, participated in the fourth National Peace Convention held from January 30th to February 1, 2018 at IMA House (Indian Medical Association) Kochi. We got energized and renewed our commitment to become peace makers. The convention was organized by National Peace Movement in collaboration with Rotary International Districts 3040 and 3201, Peace Channel Nagaland, Universal Solidarity Movement Indore, People’s Movement for Peace Kannur, Chetana Music College, Trichur, and Trend Setters, New Delhi. The Local Organizing Committee under the vibrant leadership of Dr. Vincent Kundukulam in perfect coordination with Rtn. Varghese Alengadan, the President of National Peace Movement, played a prominent role in making the convention fruitful and a spiritual experience. Participation and sharing by more than 50 students from different schools and colleges reflected the young India’s earnest desire to uphold India’s core civilizational value, ‘Vasudaiva Kudumbakam’.

Interaction with persons belonging to different states, religions, cultures and professions and exchanging views helped the participants to understand the peace building process. The fact that all participants paid towards the expenses of the convention, besides meeting the cost of their travel and accommodation shows their commitment to peace building.

The panellists, Dr. Scaria Kallor, a peace activist from Kannur, Dr. C P Anto, founder of Peace Channel, Nagaland, Ashish Franklin, the founder of ‘Aspire to Inspire’ youth organization and Dr. Jerry Joseph Pulickan, founder of ‘Home for Hope’ for providing free palliative care  inspired the participants with their stories of making a difference. The innovative ideas shared by the student speakers delighted and enriched the participants.

Peace meditation guided by Dr. Paul Poovathinkal, an expert in Carnatic music, enabled the participants to experience peace within them at the beginning of the day.

We, the participants, reflected and discussed on peace from different perspectives such as:

Fruits of the Convention

We, the participants reflected and discussed in state-wise groups about the ways and means for nurturing peace and arrived at the following action plan and suggestions to be implemented at the local and the national levels.

We, are grateful to all those who have contributed to make the 4th National Peace Convention a great opportunity for learning more about peace and experiencing peace and harmony. 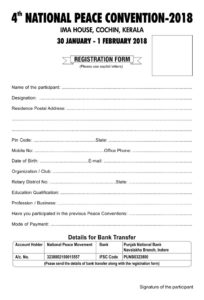